Probabilistic Real Estate is a prototype we built to explore the New York City real estate market. As explained in a previous post, we used probabilistic programming’s ability to incorporate hierarchical models to make predictions across neighborhoods with sparse amounts of pricing data. In this post, we’ll focus on how we designed the prototype to capitalize on another strength of probabilistic programming: the ability to generate probability distributions. 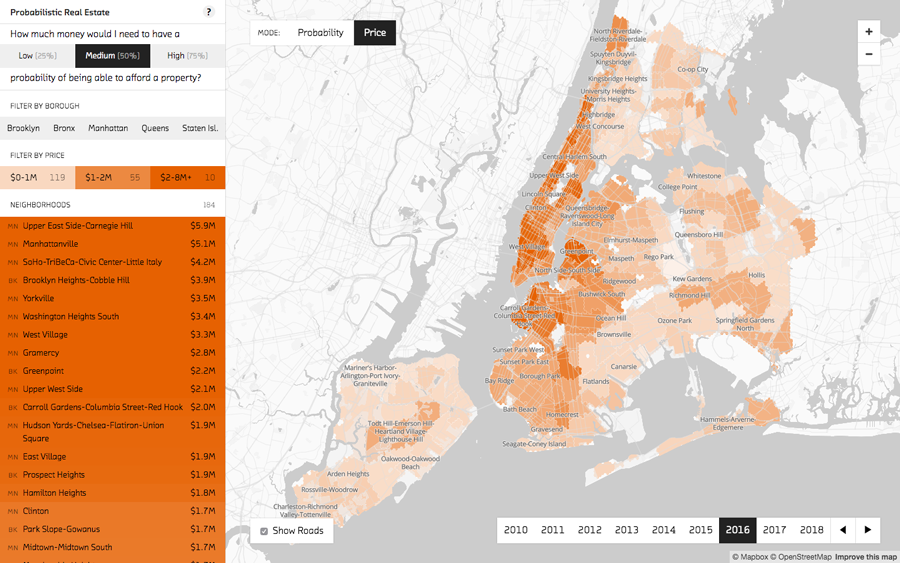 In price mode, Probabilistic Real Estate shows the median price for each neighborhood.

Changing years shows the change in median prices over time.

Use the year selector in the bottom right corner to cycle from the past (2010) to the predicted future (2018). You can see the dark orange of high median prices spread out from Manhattan further and further into the surrounding boroughs as the years progress. 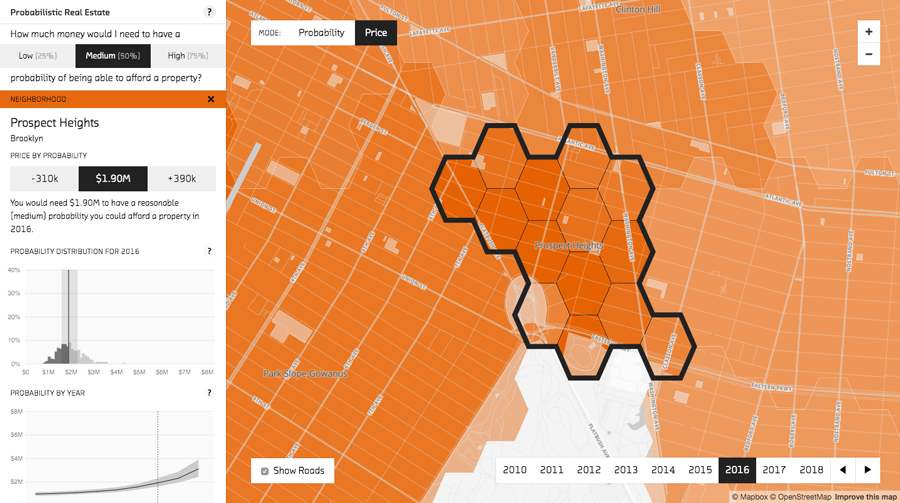 The neighborhood detail view shows the probability distribution for the selected neighborhood.

Clicking on a neighborhood reveals a more detailed view. A map of hexagonal groups (roughly five blocks each) provides more geographically specific price predictions. The graphs on the left reveal the strengths of the probabilistic approach by showing not just the median price, but the entire probability distribution. This distribution is calculated using samples generated by the model. Each sample can be considered a simulation of the way events could play out in a world described by our model. The prices for the 25th and 75th percentiles are highlighted, showing the range of likely prices. How close those percentiles are to the median predicted price is partly an indication of forecast uncertainty. In the “Probability by Year” chart they move farther apart in future years where the uncertainty grows. 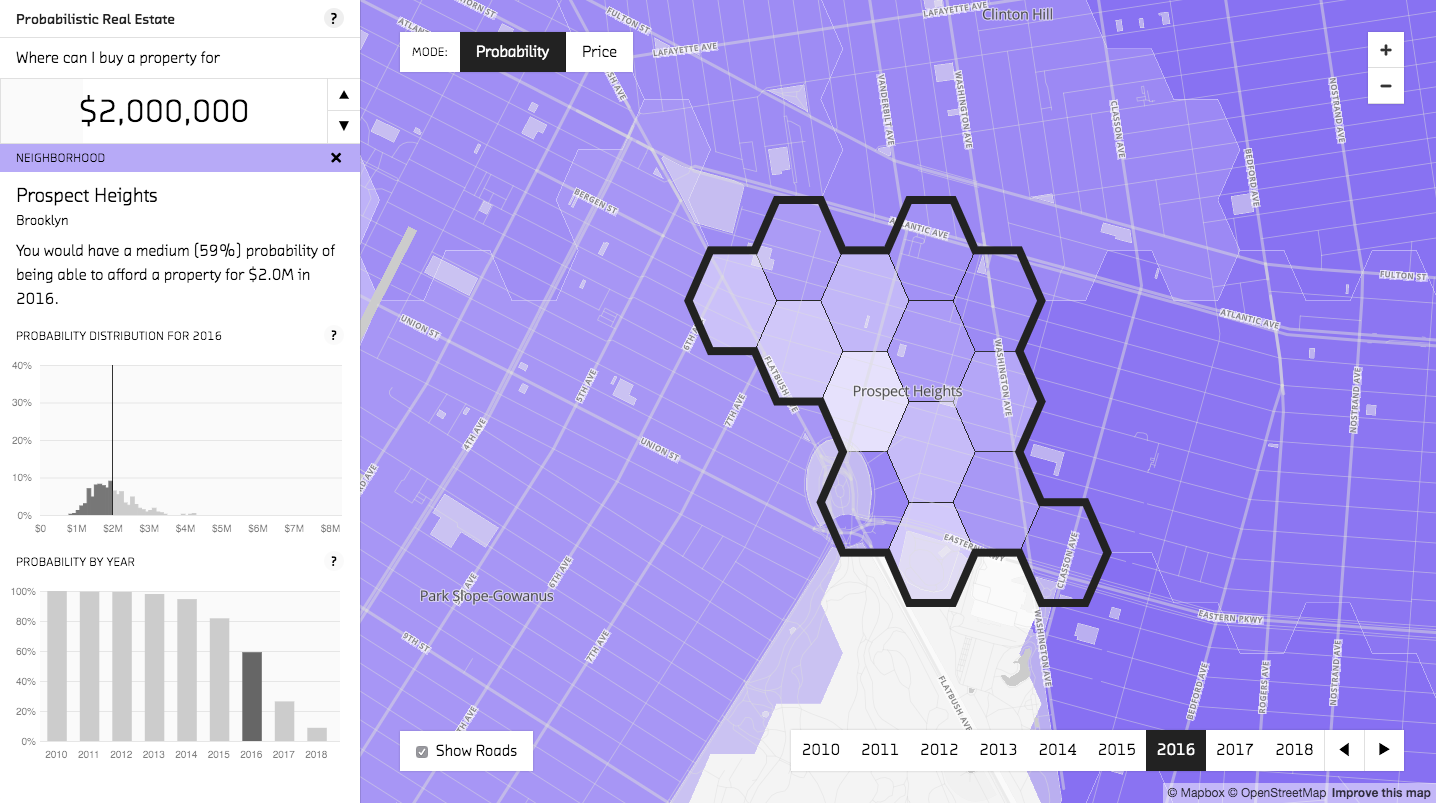 When you change the price, the probability is recalculated using each neighborhood’s probability distribution.

The probability calculation is visualized very clearly in the neighborhood detail graph. The black line is the selected price: based on your criteria, you can afford all samples less than that price (to the left of it). The probability that you could afford a property within that neighborhod, then, is represented by the set of samples less than the selected price divided by the total number of samples. Use the graph to see that how much paying an additional $100,000 improves your chances depends on where the selected price is in the distribution. In Prospect Heights in 2016, going from $1.1M to $1.2M improves your chance of affording a property by 2% (from 2% to 4%), while going from $1.7M to $1.8M increases your chance by 7% (from 35% to 43%).

Comparing the shapes of the probability distributions across different neighborhoods also provides valuable information. A flatter distribution can indicate both a wider variety of prices in that neighborhood and a greater degree of uncertainty. 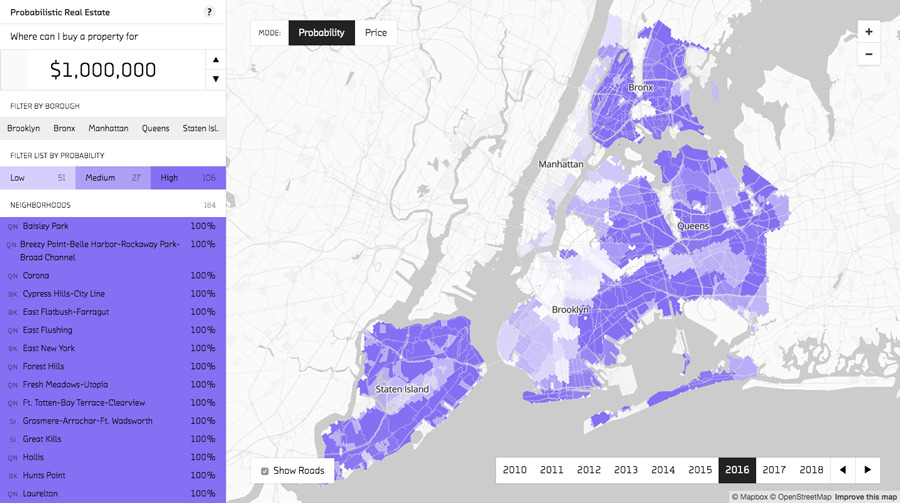 In this post we showed some of the product possibilities opened up by probabilistic programming’s ability to quantify probabilities. Now that you’ve heard a bit about that from us, we hope you explore the Probabilistic Real Estate prototype to get a feel for it in practice. Here are some questions to get you started:

The usefulness of probability distributions extends well beyond real estate prototypes. Read our interview with Thomas Wiecki to see how they can be used in predicting stock market behavior, and keep an eye on this blog for an upcoming post on how we used probabilistic programming to model the likelihood of loan repayment.

Taking Prophet for a Spin
Older